The Lord gives strength to his people; The Lord blesses his people with peace (Psalm 29:11). 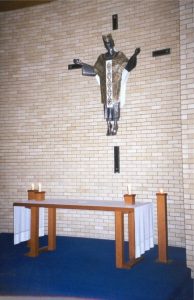 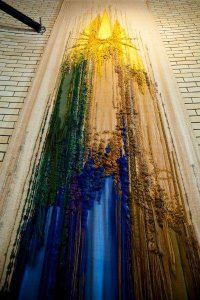 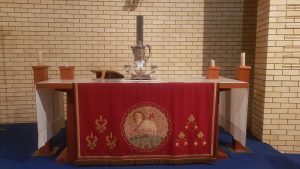 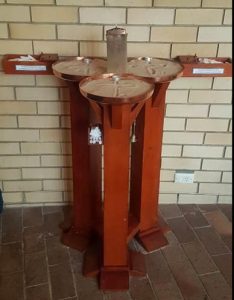 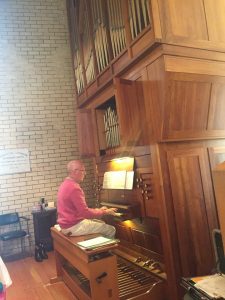 The present church building was designed by architect Barry Walduck (d. 2013) and was erected in 1976 as a response to the ‘island’ site created by land resumption and the amalgamation of the two previous congregations in the city. Walduck was possibly influenced by Brisbane architect and town planner Karl Langer (1903–1969), an Austrian refugee from the Nazis. Contemporary sculptural architecture shapes the building exterior while the interior features yellow Oregon pine.

The Christus Rex memorial cross
This is on the liturgical east wall and signifies, among other things, the Christ who comes to us and sustains us on our journey and receives us at the end of our journey. From an original concept by Paul Renner, it was crafted by artist and sculptor Nickolaus Seffrin for the 25th anniversary of the church building in 2001.

Red altar cloth
It depicts 'A Lamb goes uncomplaining forth' (See LHS hymn 57 by Paul Gerhardt). This old altar cloth was salvaged by Sieg Monz in the 1970s from a pile of ‘rubbish’ when the previous St Andrew’s church building was demolished. It was imported by the ladies guild in 1912 for the 50th anniversary of the first church on the site (1861) observed a year late. It was made usable again by Corinne Marron and her mother Lois Noller. Those who contributed 'gifts of love' towards it in 1912 were Mr Kleinschmidt Sr and Jr; Mrs Dittberner; Mrs Austin; Mrs Rüthning; Mrs E Wendt; Mrs Dirtbern; Mrs Freudenberg; Mrs Fabian; Mrs Seipel; Mrs Bergemann; Mrs Heike; Mrs C Beckmann; Mrs Jungnickel; Mrs Lemke; and Mrs Forer.

Prayer bowl
The prayer bowl arose out of our annual celebration of All Saints Day. It is a small tangible aid for two reasons:

In 2007, to complete the motif, a crown for this cross was crafted by Danish-born Jürgen De Voss of Brisbane, and it was presented by the original benefactors, Denis and Melitta Gardner.

Bethlehem memorial organ
The organ is a neo-classical mechanical action pipe organ with 17 stops. Built by Danish-born Knud Smenge of Melbourne, it was dedicated on 19 August 1990 by Pastor HVP Renner. It was constructed in memory of Bethlehem Lutheran Church, Warren Street – the sale of which funded the organ.